Consultation on 20's Plenty progressed by the City Council 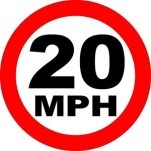 In June 2014 and again in February of this year, I proposed that Dundee City Council consult residents and communities across Dundee on the subject of having more 20mph zones in residential areas where there is support from residents.   On the second attempt – in February – the council agreed to do so.

Tonight, at City Development Committee, a report came forward on the detail of the consultation now being proposed.    I have some concerns about the content of the report in relation to contentions it makes in relation to the ‘principal road network’ and where the initial mean speed in a street is higher than 24mph.   It is important that residents’ views are sought without preconditions by officers and the guidance by Transport Scotland should be fully adhered to.

Crucially, however, the report talked about a “web based” consultation, whereas I believe it to be vital that the council consults widely with communities across Dundee to get their views - in other words going out and speaking with Dundee people about the issue.   I moved an amendment as follows :

2.2       The Executive Director of City Development will consult widely in consultation meetings with community councils, tenants and residents associations, other representative community organisations and the public across all eight Local Community Planning Partnership areas to discuss their views on where 20 mph limits would be appropriate and would be of benefit to residential amenity and road safety in each community.”

I am pleased to say that the committee unanimously agreed to my amendment.   It may take a bit longer to undertake the consultation than originally proposed but, as I said at committee tonight, it is better than it is done properly than it is done quickly.

Also, at the same committee tonight, a report was agreed on the City Centre Parking Scheme that will, subject to consultation, correct an anomaly affecting residents in West Port, whereby some residents are currently eligible to apply for a permit and some are not.  It is right that all West Port residents should be allowed to qualify for a permit, given the parking difficulties in the area, being so close to the City Centre.
Blog Update by Bailie Fraser Macpherson at 23:06
Email ThisBlogThis!Share to TwitterShare to FacebookShare to Pinterest
Labels: 20mph zones, Dundee City Council
Newer Post Older Post Home