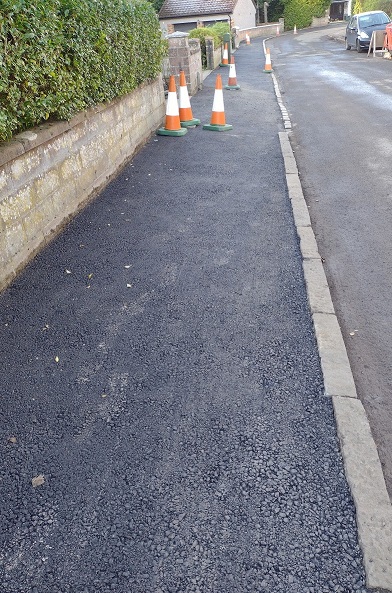 Some years ago, in two tranches, the long stretch of unadopted and very poor conditioned pavements in Menzieshill Road were upgraded and adopted by the City Council.    I had asked for the street to be added to the unadopted footpaths list, so was pleased at the much better pavements that resulted from this.

However, a section of the footpath on the south side, just west of the junction with Whitefauld Road, was left untouched (and in a poor state).    I queried this on behalf of residents and was advised that it could not be improved under the unadopted footpaths programme as the pavement there had already been adopted by the council.   That did not alter the fact that the pavement there was in a poor state of repair.

I therefore asked that the council add this to the list of adopted pavements to be resurfaced and, after a few reminders about its poor state, was given a promise it would be done this financial year.

... and the pavement improvement has now taken place!      Many thanks to the Roads Maintenance Partnership for a quality result.