Today - Aileen Carr at the Wighton! 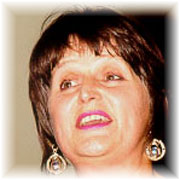 Aileen Carr was born in Coupar Angus, in Perthshire. Her father, self-taught on the melodeon, had a fine Scots voice, while her mother also sang and played the piano at musical evenings at home.

Aileen’s family could not afford piano lessons for her but that didn’t hold back Aileen’s interest in music and song.   In true folk singing style she would happily sing to people as a little girl and as a teenager was encouraged to sing and perform with a local concert party.

The 1960s were exciting times for the folk revival in Scotland but it was hearing the likes of Belle Stewart at the 1967 Blairgowrie Festival that was a defining moment for Aileen - not to mention the day she was given, at teacher training college, a copy of Norman Buchan and Peter Hall’s 1973 ‘Scottish Folksinger’. On her family moving to Goole in Yorkshire, Aileen became a floor singer at the South Cave folk club and at the Bluebell Club in Hull, where she met many performers such as Alison McMorland and Archie Fisher. In the 1970’s she returned to Scotland and became a regular solo singer at St Andrews and other folk clubs, performing at Kinross Festival and throughout Britain and Ireland. In the 1980’s she joined Ceolbeg for a time and later became a member of the highly popular a capella group, Palaver.

Aileen continues to sing solo, and over and above her clear, disciplined performances and her excellent, powerful singing voice, her most important attribute is the way she persistently searches out fresh and interesting material from both sung and printed sources, constantly researching texts, tunes and history. Although an eclectic singer in the true folk tradition, it is the great classical story ballads - especially Scottish - and their rich history that she enjoys most of all.

Some years ago Aileen was invited to perform at the Edinburgh International Festival - the critics summed her up well:

‘There was nothing to beat the full-blooded, attacking style of Aileen Carr, at her powerful, ‘wha-daur-meddle’ best’ (The Scotsman)
Blog Update by Bailie Fraser Macpherson at 08:30
Email ThisBlogThis!Share to TwitterShare to FacebookShare to Pinterest
Labels: Friends of Wighton, Wighton Heritage Centre
Newer Post Older Post Home