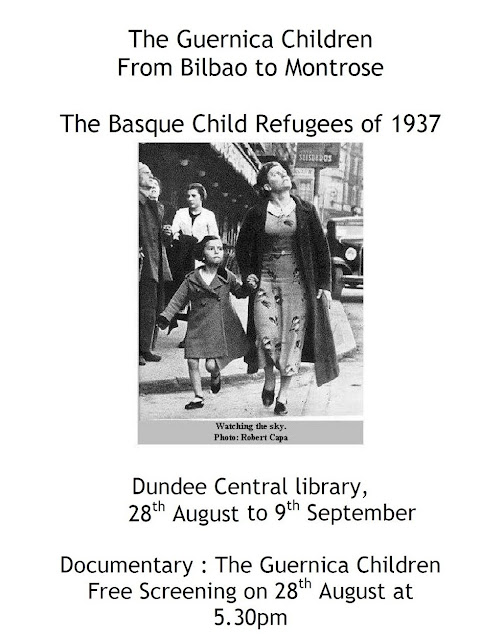 I am developing a children's war museum to present children's experience of war through their own voices and creativity.

We are presenting an exhibition about the Basque child refugees at Dundee central library from 28th August to 9th September.

After the bombing of Guernica in 1937 during the Spanish civil war 4000 children were evacuated to Britain.    The government did not want to compromise its policy of neutrality and offered no assistance to the El Nino's.    Mining communities, schools, churches, trade unions, peace groups and private sponsors supported the children who also raised money by performing concerts of music and dance from the Basque country.

The only Scottish colony was established in Montrose by supporters from Dundee.    A concert was held at the Caird Hall to raise money for the child refugees.   It is 80 years since the El Nino's came to the area. Dundee and Angus should be proud of the support that they gave to the children.    We hope our exhibition will let more people know about this local history.
Blog Update by Bailie Fraser Macpherson & Cllr Michael Crichton at 08:30
Email ThisBlogThis!Share to TwitterShare to FacebookShare to Pinterest
Labels: Dundee City Council
Newer Post Older Post Home