“Of the verse that has come straight from the trenches, the Ballads and Battle are among the very best. The horror, the exultation, the weariness and the humour of trench warfare are here.” - The Spectator

As part of the on-going commemorations of the centenary of the Great War, the University of Dundee’s Archive and Museum Services have created a new exhibition celebrating the life and work of the Dundee writer and illustrator Joseph Lee (1876-1949), whose first book of war poetry, Ballads of Battle was published 100 years ago.

Ballads of Battle established Lee as one of Scotland’s finest Great War poets, and critics placed him alongside the likes of Owen, Brooke and Sassoon. Although his reputation has since been unfairly eclipsed, his poetry and war memoirs remain powerfully evocative and authentic. What makes Lee even more remarkable is that before the war he had a highly successful career as a journalist and was also a skilled artist who illustrated his own books and periodicals. After the war he moved to London to study at the Slade alongside the likes of Stanley Spencer.

At the time war was declared in 1914, Lee was working in Dundee as a newspaper editor, writer and illustrator. He was 38 and suffered from bronchial asthma, but joined many of his younger colleagues in the 4th Black Watch, known as “Dundee’s Own”.  The group became known as the “fighter writers” and often sent back articles, poems and drawings from the front.

Arriving in France in February 1915, Lee soon saw action in many major battles including Neuve Chapelle, Ypres, Loos and the Somme. He found expression for his experiences in his sketches and poems. His first book of war poetry, Ballads of Battle, was published in April 1916 and received favourable reviews both in Britain and the USA. His next volume, Work-A-Day Warriors, published in 1917, was equally well-received.

In November 1917 Lee was taken prisoner at the Battle of Cambrai and spent the rest of the war in various prison camps including Karlsruhe and Beeskow. Even as a prisoner of war he retained his creativity, organising concerts and plays and sketching his fellow prisoners and their captors.

The exhibition is drawn from the unique collection of artworks, publications and documents held by the University of Dundee’s Archive and Museum Services, as well as some items on loan from other local collections. It will be on show in the Lamb Gallery from 27th August – see poster below : 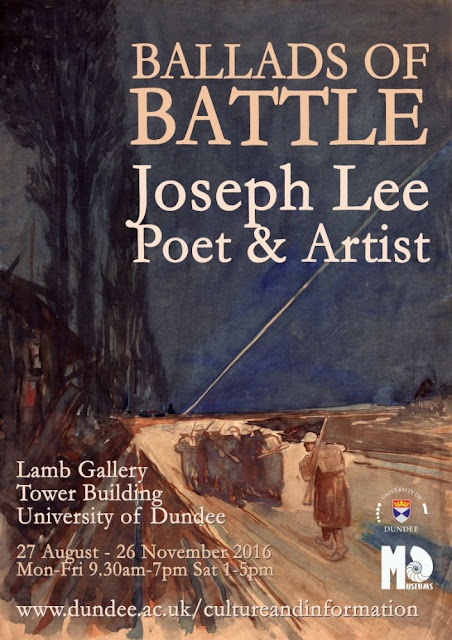