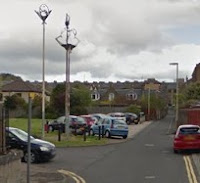 Residents in Tait's Lane have recently raised with me concerns about the state of the road surface in Tait's Lane.    I raised this with the council's Roads Maintenance Partnership who advised :

"An inspection has been carried out and an order raised to repair a number of defects on the narrow section of Tait's Lane with a timescale for repair of one to two weeks."

I have also raised residents' concerns about a minority of drivers ignoring the "Local Access Only" signage and using this very narrow street as a short cut, including some HGVs, which is inappropriate and a concern to residents.
Blog Update by Bailie Fraser Macpherson at 08:30
Email ThisBlogThis!Share to TwitterShare to FacebookShare to Pinterest
Labels: Tait's Lane
Newer Post Older Post Home