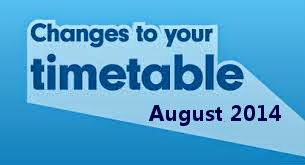 With thanks to Suzy Scott, who produces the www.dundeebuses.info website, details of the August 2014 bus changes can be accessed here.

The significant changes affecting the West End include Stagecoach Service 96 no longer operating along to Ninewells Hospital (service now 42A/42B Dundee City Centre – St Andrews only) and the opening of the new Bus Interchange at Lochee Bank Street, affecting services such as the 28/29 that run through parts of the West End Ward.

PDFs of timetables for services relevant to the West End are available as follows :

Some changes to improve reliability, including;

Monday to Friday 17.08 Service X5 Ninewells – Barnhill will now be a Service 5 via Broughty Ferry Road and Greendykes Road , instead of an X5.

Changes take effect from Sunday 17th August 2014 although those caused by opening of the interchange at Lochee may be a little later depending on the interchange completion and opening.    Note that school services for St John's High School - 9S and 10S - are not changing at this time.

Service rerouted via Lochee High Street (lower), Bank Street – New Bus Interchange, Lochee By Pass, picking up current route from Harefield Roundabout.    Buses via this route in reverse towards Douglas.   Some changes to times as a result.

No change to routes towards Asda West.     On journeys towards Douglas, buses will follow existing route along South Road, then Lochee Bank Street – New Bus Interchange, Lochee High Street (lower) and onto Douglas.    Some changes to times as a result.