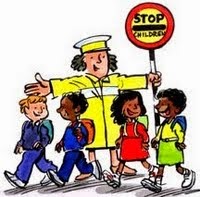 I have long campaigned for a permanent school crossing patroller (SCP) at the Kelso Steps on Blackness Road.   I was assured last year that the SCP would be retained here despite Harris Academy being decanted until 2016, given that Blackness Primary School pupils use the crossing point.

However, I have now been advised by the council's Education Department :

"The crossing point at the Kelso Steps has been re-assessed again, and as in previous assessments, it does not meet the criteria for the establishment for a School Crossing Patroller - this is in accordance with nationally recognised guidelines as directed ROSPA (Road Society for the Prevention of Accidents).

There remains one out of the two crossing point on Lawton Road vacant - however the one SCP on Lawton Road does move to the problem area during the lunchtime shift to provide cover at this busy time.

As mentioned previously we did have 9 successful SCP candidates following our last round of interviews and they are currently in the process of being recruited.  They should have completed the administrative process by the start of the new term and their training will commence as soon as possible after the schools return.

Once they have been trained and are ready to be deployed (we) will assess which points are vacant and, in priority order, they will be allocated to these slots.  Unfortunately at this stage it is not possible to know which SCP positions will be vacant or what their priority will be at that time."

I have responded as follows :

"I do feel if the new resources allow, Kelso Steps and Lawton Road 2nd point should be considered.   I do accept that the footfall at Kelso Steps has dropped whilst Harris is decanted but there are still primary school pupils crossing there to Blackness PS and I feel primary pupils need the greater help crossing at busy points than older pupils."
Blog Update by Bailie Fraser Macpherson at 08:30
Email ThisBlogThis!Share to TwitterShare to FacebookShare to Pinterest
Labels: Blackness Primary School, Blackness Road, Harris Academy
Newer Post Older Post Home