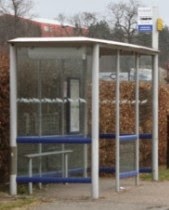 Ages ago - around Christmas 2012 - a vehicle badly damaged the bus shelter on the north side of Blackness Road, just east of the Glenagnes Road junction and near to the West End Schools' Campus.

On numerous occasions over a prolonged period, on behalf of residents, I have been in touch with the City Council seeking its replacement.   There has been much correspondence about this as there were a number of design and location issues given the congested site close to the schools' campus.

In January this year, I was advised by the City Development Department :

"The reinstatement of the bus shelter on Blackness Road has been particularly difficult.  The original shelter was knocked down in an RTA around 12 months ago.  An order for a replacement is with the shelter supplier and we had been advised to expect delivery this month.  I am still hopeful that will happen.

However, the location for the reinstatement of the shelter has caused much discussion within the Transportation Division.   (Given congestion at the footway outside the school at 1515-1525) ... traffic colleagues have advised that reinstating the shelter in exactly the same location is likely to worsen matters.  We have discussed moving the shelter down the road slightly (about 5m) so that it sits within or adjacent to an alcove area ... but a street lighting column and BT access chambers present further difficulties for this option.   I'm hopeful however that these issues will be overcome and we will have a successful outcome in a matter of weeks."

I have since been advised:

"There is quite a lot of work required to install the shelter at this site and repair/improve the footway.   Given the proximity of the site to the new West End campus, the engineer has asked for the work to be actioned during the school holiday in April 2014."

Although it has been a long time coming, I am pleased there appears to be a successful conclusion to this saga and that a new shelter will be in place after the school Easter holidays.
Blog Update by Bailie Fraser Macpherson at 08:45
Email ThisBlogThis!Share to TwitterShare to FacebookShare to Pinterest
Labels: Blackness Road
Newer Post Older Post Home