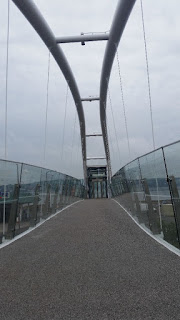 Since the Seabraes bridge opened in 2015, I have had to report numerous lift breakdowns to the City Council and there have again been problems recently.

I have now been updated by the Team Leader in Dundee City Council's City Development Department Infrastructure Team, as follows :

"Following discussion with our internal property colleagues, the recent fault with the lift has been with the landing call buttons 'which when pressed' have not called the lift as highlighted by your constituents.

I have been advised that the buttons were recently replaced, however this has not completely resolved the problem.

Lift engineers attended site last week and gave (remote) access to the lifts software which allowed the control board manufacturer to look at what was going on with the programming.

They have presented a couple of ideas which they are currently trying at the moment.  If all else fails, then the control panel may need to be replaced."

I am keen to ensure there is a robust solution as the number of breakdowns over approaching five years has been significant.
Blog Update by Bailie Fraser Macpherson at 07:00
Email ThisBlogThis!Share to TwitterShare to FacebookShare to Pinterest
Labels: Seabraes
Newer Post Older Post Home