THIS - An exhibition celebrating the life and work of Jim Stewart 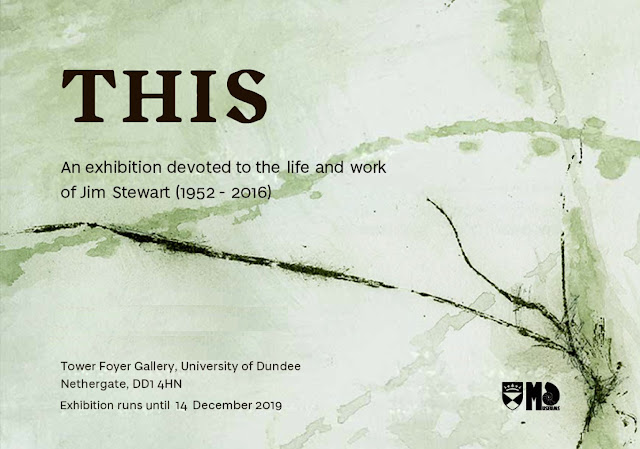 THIS
An exhibition celebrating the life and work of Jim Stewart (1952-2016)
Tower Foyer Gallery, University of Dundee

Jim Stewart was an inspirational and much-admired author and teacher described by Dundee’s Makar, W N Herbert, as “one of the most significant poets of the last decade”.

James Clark Quinn Stewart was born in 1952 to a working-class family in a cold tap and outside toilet dwelling on the Lochee Road, Dundee, barely surviving a near-fatal bronchial illness in early infancy. He and his younger sister, Ros, were brought up by their single mother, a devout Jehovah’s Witness. Often at odds with the church in later life, Jim remained devout and became a learned theologian.

Jim studied English at the University of Dundee (where he went on to teach for many years) and completed a PhD at Edinburgh, basing his research on the works of Virginia Woolf – a passion which remained with him, together with a deep reverence for nature and music, all his life.

Known as Jim to friends, colleagues and students alike, he became an inspirational and much-admired teacher.  He wrote poetry from childhood and went on to become one of Scotland’s finest nature poets, if one of the most modest. His keen poet’s eye found beauty in everything: flies, moles, spiders and especially bees. The publishing of collections did not rate highly in his list of ambitions and he often had to supplement his income from short-contract university teaching with bouts of window-cleaning and proof-reading, as he describes in letters included in the exhibition.

Central to the exhibition is a portfolio box designed and created by Marion Archibald at her studio in The Old Printing Works, Thornton. The box contains a hand-painted book of tributes to Jim in the form of poetry and prose. Created by Marion and Jim’s former student Keren Macpherson, the book folds out to five metres in length.

The exhibition also features several of Jim’s poems along with paintings and etchings by Keren and fellow artists Kirstie Behrens, Merran Gunn and Derek Robertson, interpreting and illustrating Jim’s poems in a unique and personal way.