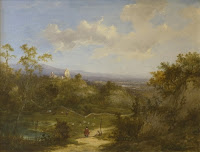 Our latest exhibition has been opened in the Tower Foyer Gallery, University of Dundee, featuring a selection of the University’s extensive collection of 19th century Scottish art.

It includes influential figures from early in the century such as Robert Scott Lauder and David Wilkie, renowned Victorian painters like William Quiller Orchardson and examples of the famous Glasgow Boys from the end of the century.

One of the relatively few professional women painters of this era, Charlotte Nasmyth, is also featured, as well as notable Dundee artists such as James Douglas and David Foggie.

The exhibition is on show until 28th September and is open Monday to Friday 9.30am-7pm, and Saturdays 1pm-5pm.