Happenings at the Wighton! 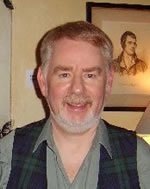 Alan Brown was born and raised less than half a mile from where the present day Wighton Library stands and Dundee has been a major influence on his career to date.    Exiled from the city since 1970 he is difficult to pigeonhole: singer, songwriter, musician, composer, novelist, journalist, after dinner speaker, playwright, poet, standup, tour guide, and is probably best summed as - an entertainer!

Despite thirty years performing professionally in Scotland and overseas this will be his first ever solo appearance in his hometown. Expect a varied programme of award-winning songs and stories, brand new material and a few surprises.