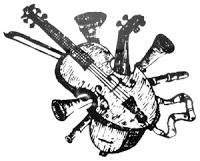 For our October Lunchtime Recital we are delighted to welcome two stalwarts of the Scottish traditional music scene Jim & Kate Taylor and their extensive repertoires of old songs and bothy ballads of the northeast.

Jim Taylor was born near Garlogie where he still lives, and is a retired Quantity Surveyor. A nephew of the late King of the Bothy Ballads, Tam Reid, Jim is keeping Tam's songs going as well as a few others. He is in great demand as a compere, which allows his native North East humour to shine through, and he has been a guest at several singing festivals throughout the UK and Ireland.

Kate Taylor started singing at the tender age of 40 and has not stopped since. She is passionately fond of traditional singing and has been influenced mainly by Sheila Stewart, Elizabeth Stewart and Jane Turriff. Kate is a member of the Aberdeen Folk Club and the Aberdeen Branch of the TMSA, and she has also been a guest at several folk festivals and singing weekends where her fine voice and sense of fun have won her many fans.