The next exhibition in the University of Dundee’s Lamb Gallery will be a retrospective of the Dundee painter Alec Muir. It features over 30 paintings produced over a period of nearly 70 years. A star student of James McIntosh Patrick at Dundee College of Art (now Duncan of Jordanstone College of Art and Design) in the 1940s, Muir is now 86 and continues to paint.

Alec’s work is meticulous in its technique, with some of his paintings taking several years to complete. Some are detailed recreations of particular places and times in Dundee and elsewhere, while others are more surreal flights of the imagination. Throughout the exhibition we see an absolute dedication to the art of painting, combined with a quirky sense of humour that is distinctively Dundonian.

Muir was born in Dundee in 1930 and enrolled at Dundee College of Art at the age of just 15 in 1945. He recalls this as a particularly exciting time to be at the College due to the number of Polish servicemen studying there – 11 of the 36 students that year were from Poland.

In 1950 Muir was awarded a travelling scholarship and had his first work (a sculpture) exhibited at the Royal Scottish Academy. Although head of sculpture Scott Sutherland tried to persuade him to continue in that medium, Muir chose instead to concentrate on painting.

Following his National Service, Muir worked for British Road Services before joining the process department of D C Thomson where he worked for six years. In 1963 he became an art teacher, working in both Linlathen High School (1963-68 and 1973-88) and Morgan Academy (1968-73).

Muir retired in 1988 and began to devote himself full-time to painting. With greater freedom he was able to travel more and began painting colourful scenes in Italy, Spain and Portugal. At the same time, he has continued to document the ever-changing face of Dundee from his own unique perspective.

The paintings on show cover his entire career, from early student works up to some of his most recent compositions. The exhibition will run from 7th January until 25th March 2017 - see poster below : 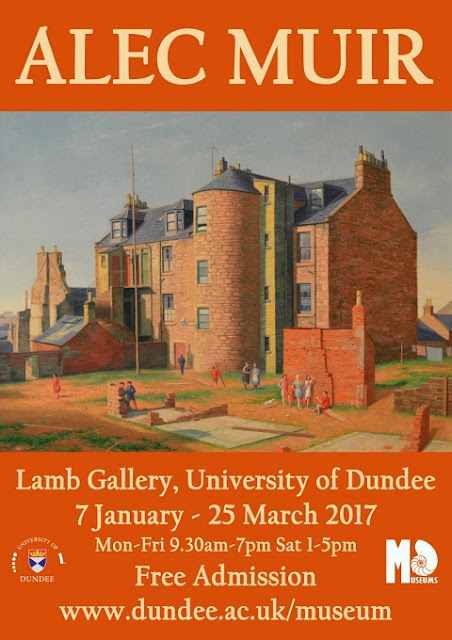