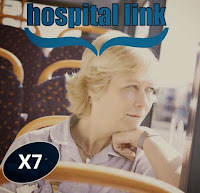 Residents will recall that in recent months, my LibDem colleague Cllr Willie Wilson of Perth and Kinross Council and I have highlighted the problems the X7 hospital link bus service causes many constituents who are elderly or who have mobility difficulties, given the style of bus used.

I advised last month that Willie had written to Sir Brian Souter, Chairman of the Stagecoach Group, requesting that he intervenes in this matter.

Willie has now received a rather disappointing reply from Stagecoach that you can read here.

Willie has now issued the following news release about the situation - reported in today's Courier.   We will both continue to campaign for a better style of bus or coach to be used in this service :

Willie Wilson, Scottish Liberal Democrat Councillor for Perth South has been campaigning on behalf of local residents to request Stagecoach to replace the type of coach provided on the X7 Bus Service, the hospital inter-link bus between Perth Royal Infirmary and Ninewells Hospital.  He is being supported in this campaign by his Scottish Liberal Democrat colleague on Dundee City Council, Councillor Fraser Macpherson.  In addition, all three other local members for Perth South area, Councillor Bob Band, Councillor Alistair Munro and Councillor Alexander Stewart, strongly support the moves taken by Councillor Wilson.

“This is an extremely disappointing response.  It just really ignores the total issue.  There is adequate testimony to indicate that the buses are not suitable for inter-hospital transport between PRI, Ninewells and Royal Victoria Hospital.  We have had numerous complaints from residents; both in Dundee and Perth, on the matter and, apart from some very minor adjustments to the buses, Stagecoach have failed to address this.  The response is totally unacceptable.

I am writing back to the Chief Executive asking him to join me on the bus one day on a return journey between the two hospitals so that he can see for himself the difficulty that people have in gaining access to the bus, climbing the stairs and negotiating the narrow passage, especially when the bus is moving.

I am really disappointed that a huge company like Stagecoach cannot set their minds to resolving the problem rather than just repeating information they have already given and indicating that passenger numbers have increased so that’s all that matters.  The public deserve better.”
Blog Update by Bailie Fraser Macpherson at 08:30
Email ThisBlogThis!Share to TwitterShare to FacebookShare to Pinterest
Labels: Bus Services
Newer Post Older Post Home