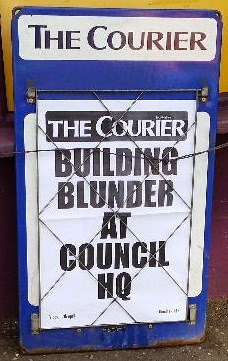 As reported in yesterday's Courier and Evening Telegraph, after a protracted period of complaining of behalf of constituents about faults to the front entrance doors at the City Council Headquarters, I have received an assurance from the council’s Director of City Development that the council is considering replacing the doors that have been out of action on numerous occasions since the council headquarters in North Lindsay Street opened.

Following the most recent closure in March of some of the doors due to a fault, I wrote to the council’s Director of City Development :

“I have probably contacted you half a dozen times now over the months following constituent complaints about the doors being out of action.    Are we really sure these are fit for purpose given the number of problems that have been encountered?   Given the huge amount of public traffic through them, we really do need doors that can withstand large amounts of public use.    Should we not be looking to replace them?    Have revolving doors been considered?”

In response, the Director of City Development wrote :

“The City Architect and Head of Property are to look at possible alternative doors for the entrance. I shall advise you further in due course.”

I had long since concluded, given the frequent repairs needed to the entrance doors at Dundee House, that better, more robust entrance doors were required, so I am pleased this is now being progressed.
Blog Update by Bailie Fraser Macpherson at 08:30
Email ThisBlogThis!Share to TwitterShare to FacebookShare to Pinterest
Labels: Dundee City Council
Newer Post Older Post Home