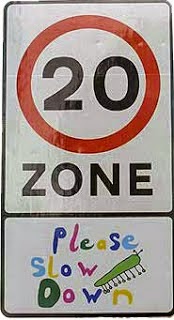 Last June, I proposed that Dundee City Council consult residents and communities across Dundee on the subject of having more 20mph zones in residential areas where there is support from residents.

On that occasion, my proposal was defeated by a single vote.

I took the matter back to the City Council's City Development Committee tonight, following the publication in January of guidance by Transport Scotland which is supportive of 20mph zones.

My motion read as follows :

"Committee notes Report 43-2015 by the Director of City Development on 20mph speed limits.

In light of recent “Good Practice Guide on 20mph speed restrictions” published by Transport Scotland referred to in the Director’s report, Committee calls for the development of a policy on the implementation of 20mph zones and limits, and, as a first step, the Director of City Development is instructed, within the next six months, to consult widely with community councils, tenants’ and residents’ associations, other representative community organisations and the public across all eight Local Community Planning Partnership areas to discuss their views of where 20mph limits would be appropriate and would be of benefit to residential amenity and road safety in each community.

The Director of City Development is thereafter instructed to bring a report to committee on the outcomes of such a consultation exercise, by December 2015, with a view to thereafter considering commencement of a phased programme of introducing 20mph limits on residential roads from 2016/17 onwards, giving due consideration to the revenue and capital and enforcement implications of such a programme."

I am pleased to say that, on this occasion, the SNP administration agreed to support my motion, as did all opposition members.   I agreed to an alteration of the six month deadline referred to above given the workload of relevant officers, which is perfectly reasonable, but the bottom line is that the council will now be consulting with people across Dundee on this important road safety measure.