Latest from Friends of Wighton

From Sheena Wellington of Friends of Wighton: 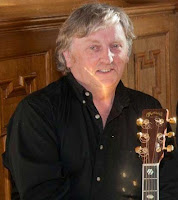 Ewen Sutherland,  is a warm-voiced singer and accomplished guitarist of the greatest skill and sensitivity

Dundee born but brought up in Blairgowrie, Ewen became interested in folk music young and formed the band Puddock's Well with school friend Dougie MacLean. More recently he has been a member of the Gallivanters Ceilidh Band, founder member of The Keekin Glass and a regular performer at clubs, hotels and hospitals.

For more than two decades, he has been Sheena Wellington's accompanist of choice and together they have appeared at clubs, concerts & festivals across the UK.

His solo CD Pearls of Scotland has received very favourable reviews and is much in demand at gigs.
Blog Update by Bailie Fraser Macpherson at 06:30
Email ThisBlogThis!Share to TwitterShare to FacebookShare to Pinterest
Labels: Friends of Wighton, Wighton Heritage Centre
Newer Post Older Post Home