Yesterday, along with a number of other councillors (from both Dundee City Council and Fife Council), I attended a briefing with BEAR Scotland about the road maintenance and junction improvement project in East Dock Street and Broughty Ferry Road.

I sought assurances from BEAR Scotland that they have contingency arrangements in place should there be tailbacks at the Swallow roundabout back along Riverside Avenue.

Here's part of a letter I received today from BEAR about the project (and see http://tinyurl.com/eastdock) :
A92 EAST DOCK STREET STRUCTURAL MAINTENANCE & Trades Lane Signalisation SCHEME
SCHEME NO. 07/NE/0101/025

Transport Scotland and Dundee City Council are working in partnership to deliver an essential road maintenance and junction improvement project within this financial year on the A92 trunk road between Gellatly Street and Greendykes Road.

The £2.8 Million project will involve resurfacing 2.3Km of the carriageway and the installation of a new signalised junction at Trades Lane and City Quay, which forms part of the Dundee Waterfront development plan. In order to resolve the long term flooding problem in the area we will also be installing a pumped drainage system at the south of Trades Lane. A leaflet is enclosed which provides details about the project and proposed Traffic Management arrangements.

The works are set to commence on the 8th September lasting for an estimated 10 weeks. It is inevitable that there will be some disruption and delays to road users. However, this is a Lane Rental type project where the contractor is awarded a bonus for early completion and penalised if the works take longer than the agreed timescales, such that any inconvenience to road users, residents and businesses is minimised.

I trust this helps to explain the nature of the project and the efforts being made to minimise delay during the works. It is hoped that the long term benefits will outweigh the inconvenience during construction. 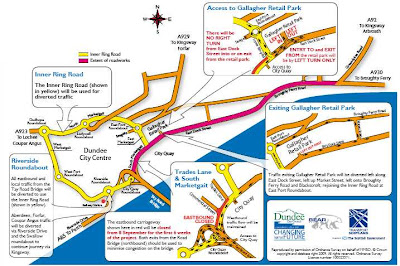