There has recently been considerable concern raised across the City by changes to Travel Dundee bus routes and timetables, introduced on 2nd November.
As City Council Planning & Transport Convener, I recently chaired a meeting of City Councillors and a representative of the bus company at which councillors from across the City highlighted constituents' concerns about various services. In the West End, the route of Service Number 14 and cuts to the frequency of Service Number 2 were raised. 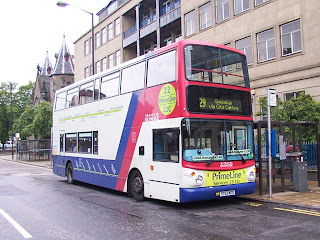 I have this week been contacted by parents in the West End, whose children attend St John's High School. Their complaint is about Service Number 2A in the morning, immediately before the start of the school day. The bus is now missing out Blackness Avenue and arrives later at the school - not in time for the start of school.
I have raised this issue with the City Council's Acting Head of Transportation, who will be raising the matter with the bus company at a meeting on Monday.
Blog Update by Bailie Fraser Macpherson at 18:06
Email ThisBlogThis!Share to TwitterShare to FacebookShare to Pinterest
Labels: Blackness Avenue, Travel Dundee
Newer Post Older Post Home