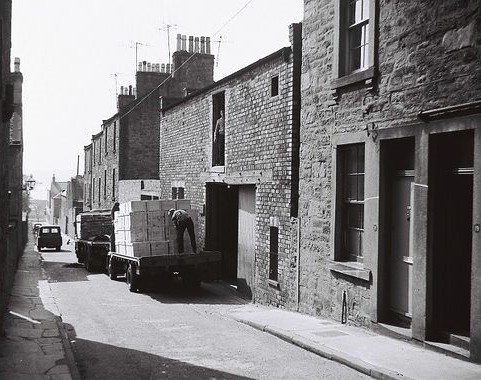 I sought the advice of the City Archivist who has helpfully responded as follows :

"The Dundee directories, electoral registers and Ordnance Survey maps include the apostrophe whilst the valuation rolls do not. Curiously the street name appears to be listed both with and without the apostrophe on the One Scotland Gazetteer of addresses.

According to Gillian Molloy's 'Street Names of Old Dundee' the street is thought to be named after James Paton, a manufacturer in Hawkhill who took possession of land in the Seafield area of the Estate of Blackness in 1815."

The photo above is of the lane in the past.   The first door on the right of the photo is numbered 19 and the one next to that 21.   The industrial building is number 23 and according to the 1965 Dundee Directory was occupied by the joinery company McTavish, McAinsh & Sons.
Blog Update by Bailie Fraser Macpherson & Cllr Michael Crichton at 07:00
Email ThisBlogThis!Share to TwitterShare to FacebookShare to Pinterest
Labels: Paton's Lane
Newer Post Older Post Home