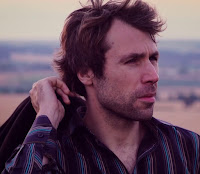 Simon Kempston is ‘one of Scotland’s best songwriters’ (The Sunday Herald) and leading fingerstyle guitarists. Simon’s original, distinctive guitar playing is founded upon a complex, finger-picking style which technically reveals his classical training yet is steeped in the history of the folk, blues and celtic traditions and is complemented by Simon’s rich, powerful and compelling clipped vocal style.

An award-winning songwriter and an inspiring, poetic lyricist, Simon’s songs are amongst the most thought-provoking you are likely to hear, often sidestepping the usual themes of love and attraction in favour of offering social commentary and an insight into the everyday lives of people.

Simon is a powerful and intense live performer, and his true passion for music and song shines through in his acclaimed shows. He has performed at scores of esteemed venues and festivals in 27 European countries and Canada, Ronnie Scott’s, Celtic Connections, Sligo Live and Fairport Convention’s Cropredy Festival amongst many others. Simon has also performed live on BBC Radio Stations across the UK, as well as a plethora of continental music radio stations.

Simon’s first full-length album ‘Carefree Prisoner’ was released in 2009 to rave reviews and his latest album, which sees him reignite his relationship with Ian McCalman as producer, is his best, most poetic, most diverse and engaging collection of songs yet. The album is entitled ‘Broken Before’, was released in late 2018, and features superb, complementing instrumentation from Robbie Greig, William Archibald and Bob Miller.

Immerse yourself in the soundscape of this incredibly talented performer and allow his beautifully crafted folk-tinged songs to transport you on a uniquely Scottish journey.