A  very busy Saturday and I start with a thank you to the City Council's Chief Executive David Dorward who took the trouble to call me on a Saturday to discuss winter maintenance concerns in the West End that I had raised with him.
And thanks also to the residents in Hillside Terrace who knocked on other residents' doors to get cars off the street to allow the snow plough in - and to the Roads Maintenance Partnership Manager at Tayside Contracts who, at my request, ensured there was a plough available thereafter.  That is just one example of attempts to get untreated streets ploughed or gritted and there has been good progress in other streets too.
But there is a lot still to do across the West End - both with winter maintenance and the delayed refuse collection - and I have raised further concerns in other streets with Waste Management and with the City Engineer again today.
Following my speaking with the Evening Telegraph, the paper last night covered the continuing concern about graffiti vandalism at the Hindu Community Centre in Taylor's Lane.     The article highlighted the graffiti vandalism that happened last weekend and the photo used was taken on a resident's phone - he had kindly forwarded me the photo.    Naina at the Hindu Community Centre was quoted expressing her understandable concern about the on-going vandalism. 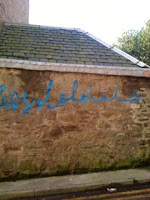 Last night, the centre was vandalised again - see right.   I have already been in touch with the Police about this.   The vandalism was quite widespread in the immediate area and including black paint (with familiar tags) splattered across a transit van in Madgalen Yard Road.     I have spoken today with the resident who owns the van - he had bought it only yesterday - and he is understandably very upset at the utterly mindless vandalism of his property.
I have requested a discussion with our local police inspector about this situation - I can only praise the police response - they have been very proactive on the graffiti vandalism issue, but this continued vandalism is now a very real concern.    A local resident and I are also requesting a meeting with the Procurator Fiscal about how graffiti vandalism is handled within the fiscal's service.
Blog Update by Bailie Fraser Macpherson at 19:27
Email ThisBlogThis!Share to TwitterShare to FacebookShare to Pinterest
Labels: Dundee City Council, graffiti, Hillside Terrace
Newer Post Older Post Home