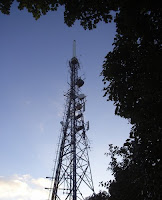 Reports in the local press today and yesterday (click on headline above or go to http://tinyurl.com/tvreceptiondundee to read last night's Evening Telegraph) about TV reception and in particular BBC1 analogue reception in those parts of the city served by the Tay Bridge transmitter (including most of the southern part of the West End) has resulted in a number of complaints from constituents.

Given the quote by the BBC in last night's Tele :

"A spokeswoman for the BBC in Scotland said there was not a transmitter problem, but she was unable to shed any more light on the cause of the interference"

it was interesting to hear from a constituent who lives just south of Perth Road and who, having phoned the BBC was told there were engineering works on the transmitter taking place!
I have asked Digital UK if the transmitter owners (Arqiva) has further planned engineering works linked to the digital switchover. It is important that Arqiva properly advises of engineering works before these take place, in the run-up to the digital switchover next summer.
Blog Update by Bailie Fraser Macpherson at 22:53
Email ThisBlogThis!Share to TwitterShare to FacebookShare to Pinterest
Labels: BBC, digital television
Newer Post Older Post Home